A Tale of Two Lighthouses In 1867, a steamer left France carrying the parts needed to construct a lighthouse: a Fresnel lens, a clockwork mechanism, and cast iron panels. When the pieces arrived in California’s Drakes Bay, they traveled three miles by ox-drawn cart to the westernmost tip of the Point Reyes Peninsula. The materials were then lowered 300 feet below the top of a cliff to a spot that had been leveled for the purpose by dynamite—the lighthouse needed to be low enough to shine beneath the fog. After the pieces were painstakingly assembled, the Fresnel lens refracted its first beams to passing ships on December 1, 1870. Two years later, on a cliff about 100 miles to the south, another Fresnel lens fired up at Pigeon Point in Pescadero, California. Unlike its short, stubby, cast iron counterpart, Pigeon Point Lighthouse is one of the west coast’s tallest lighthouses, standing 115 feet high, and it’s clad in brick instead of cast iron. Both lighthouses survived the 1906 earthquake. But the pummeling winds and corroding fogs of the Pacific coast have taken their toll over the decades, and both are in sore need of rehabilitation.

Pigeon Point Lighthouse suffered a catastrophic failure in December of 2001, when two segments of the cast iron belt course on the exterior fell off. They knocked off part of a granite lintel on one of the windowsills as they fell and cracked more cast iron pieces at the bottom before hitting the ground. The lighthouse has been closed to the public ever since. 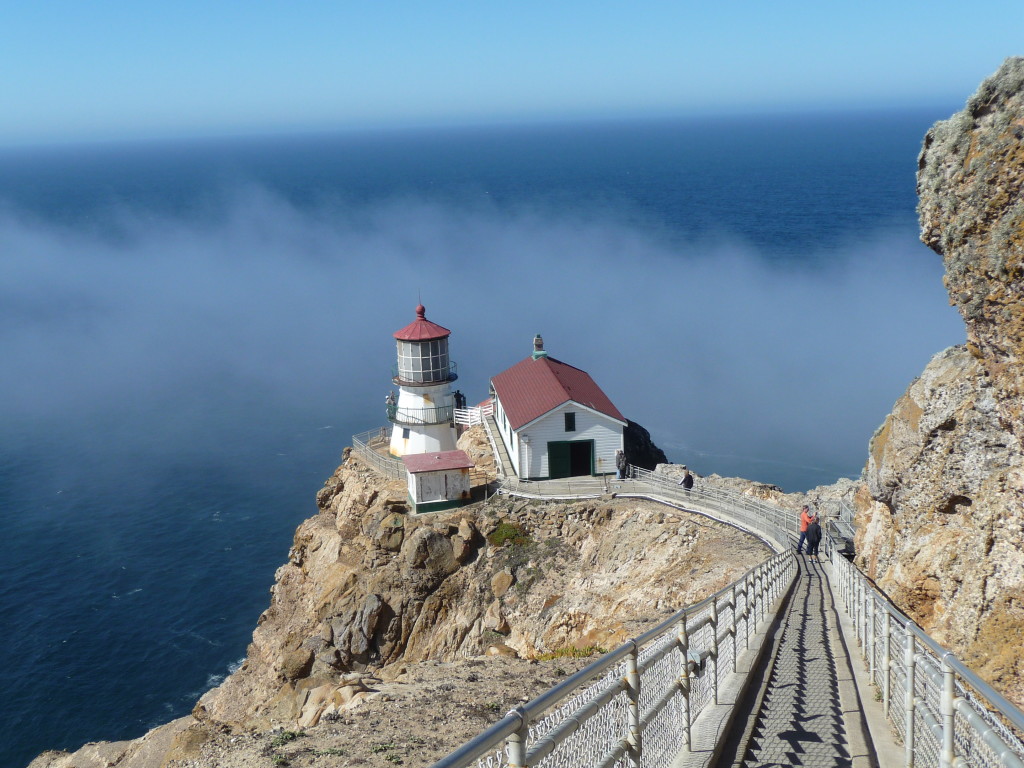 To prepare a rehabilitation plan, we teamed up with International Chimney Corporation, which has a specialty group that repairs lighthouses across the country (turns out lighthouses are similar to brick industrial chimneys in many ways). We broke the effort into phases so work can begin while fundraising is going on. The first phase is the structural rehabilitation of the top of the lighthouse, the second will rehabilitate the lower tower, and the third will restore the oil house, a one-story building at the base of the tower.

Although Pigeon Point Lighthouse is all unreinforced masonry, it survived the 1906 earthquake relatively unscathed, except for a crack about 40 feet from the ground. Circular buildings perform differently in an earthquake than rectangular buildings, so we don’t need to tear the whole building apart to insert shear walls.

We’ll replace the belt course and rehabilitate the cast iron brackets to return the lighthouse to its original appearance. Then we’ll carve away some of the brick and put in reinforced concrete beams that will act as tension rings. These won’t be visible to the eye. We’ll also put in radial steel beams to support the gallery deck, and those will technically be visible—although theywill be hard to see since they will be painted black against a black background.

In the oil house, the exterior brick walls are thick enough that our structural engineer isn’t concerned about them. The problem is that the interior partition walls are very thin. So we’re putting steel tubes on either side of the door, from the framing underneath the floor up to the ceiling framing. We’ll also add anchors beneath the floor framing and up in the attic to tie the attic framing in to the ceiling framing.

Until recently, the Pigeon Point Lighthouse had its first order Fresnel lens intact in the tower. California State Parks would turn it on once a year on the anniversary of the very first lighting, and hundreds of people would come to watch and take photographs. Because of the structural failure, and because construction would potentially endanger the Fresnel lens, we decided to take it out before the interim stabilization began in 2012. International Chimney worked with a trio of former Coast Guard lampists who specialize in the conservation of Fresnel lenses. They ran a zip line from the top of the tower and put each piece of the lens into a cradle that was wrapped up safely and zipped down to the parking lot one piece at a time.

The Fresnel lens is currently in the fog signal building nearby, so the public can still view the historic lens. Once the reinforcement of the tower is complete, we’ll return it to the top of the lighthouse, and the public will once again be able to see it in its original location. We’ve just begun design work on the Point Reyes Lighthouse. This one is all cast iron panels—no brick whatsoever. Here, the problem is that the brackets holding up the roof have failed. We believe that happened because this the windiest spot in the country—wind speeds have been recorded up to 133 miles an hour out there.

The Plexiglas surrounding the lantern, which was installed in the 1980s, has been abraded by the wind so much that it has turned milky white—you can’t see through it anymore. As part of the work, we’ll replace that with real glass. Point Reyes Lighthouse also has a Fresnel lens in it, still connected to its clockwork mechanism. As with Pigeon Point, it’s not used for navigation anymore, but the goal is to be able to use it for display purposes.

We will replace the copper roof and a number of the pieces of the cornice. We’ll also use a technique called metalizing, which involves stripping all the metal on the lighthouse exterior, applying a zinc thermal spray, and painting the surfaces with a high-performance coating to give them the longest life possible. With the Pigeon Point Lighthouse, the big constructability challenge is that it’s 120 feet tall, and it’s sitting on a cliff. The Point Reyes Lighthouse is much shorter, but we’re going to have to lug materials 300 feet from the road and another 300 feet down from the top of the cliff. Luckily, there is a cart that the lighthouse keepers of old used to bring materials down—you turn a winch, lowering the cart on rails alongside the steps. But it won’t be easy.

Still, just think about the fact that the lighthouse keepers at Point Reyes had to go down all those steps at the beginning of every shift and up again at the end. There were four keepers working in six-hour shifts. They lit the lamp at night, wound the clockwork mechanism that turned the lens, stoked the steam-powered fog signal, polished the brass, and kept everything in working order.

The California State Parks Foundation and the Coastside State Parks Association are raising private funds for the restoration of Pigeon Point, and the National Park Service is seeking funds for the Point Reyes Lighthouse. The care and dedication that the keepers at both lighthouses put into maintaining their buildings is a model for us as we look to refurbish these historic treasures and keep them open for future generations to visit.